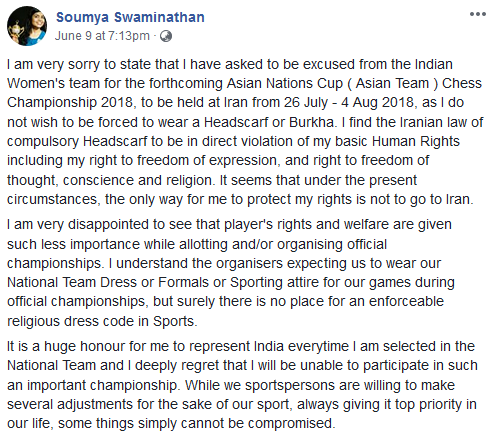 Soumya said that when she first gave the nod to be a part of the Indian team, the host country was to be Bangladesh and the dates were different. “But once the new dates and new venue came up, I excused myself,” she added. When asked if the All India Chess Federation (AICF) should have protested against the decision to allot the tournament to Iran, Pune girl Soumya told TOI: “I can’t expect everyone to be of the same opinion as me. It’s subjective issue.”

However, in her Facebook message, Soumya blasted the officialdom. “I am very disappointed to see that player’s rights and welfare are given little importance while allotting and/or organising official championships,” she wrote.