India Skipper Virat Kohli registers an outstanding record on the Day 2 of the first Test match against the Windies at the Saurashtra Cricket Association Stadium (SCA) in Rajkot. The Captain became the only Indian cricketer to score more than 1000 runs in Test cricket for the third consecutive year. 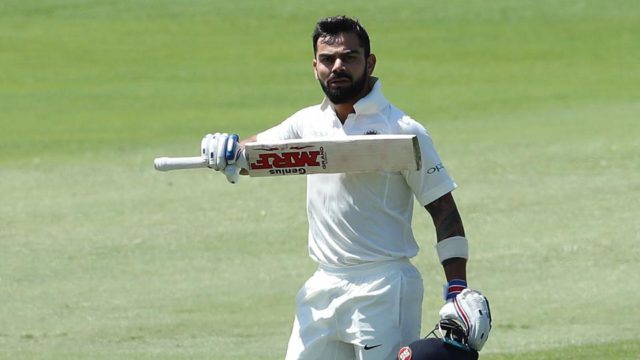 Virat Kohli is also the only batsman so far to score over 1000 runs in this calendar year. England Test captain Joe Root is second in the list with 719 runs from 10 matches while South African Aiden Markram is third with 660 runs from nine matches.

The Board of Control for Cricket In India (BCCI) took note of Kohli’s achievement and tweeted, “He becomes the only Indian player to score 1,000+ Test runs in three consecutive calendar years #KingKohli.”

The Indian skipper also surpassed Australia’s Steve Smith to top the list of centurions among active players. Smith, who is serving a one-year ball tampering ban, has 23 tons in 64 Tests.

Kohli reached his 24th century in his 123rd innings, while Australia’s Bradman took just 66 knocks to achieve the same feat.