Every six months, the National Defence Academy, which is located in Khadakwasla near Pune organises a cross-country race among cadets. Sans half-time, timeouts or substitutions, it is run over harsh, undulating terrain. The 12.5 km course is punishing, and the emphasis is on finishing, not beating fellow cadets, as every finisher earns points for his squadron. The race is the way to the prestigious inter-squadron Gilder Trophy, awarded to the best of 18 squadrons.

The Echo squadron holds the record for the longest unbroken possession of the Gilder Trophy. Naturally, a lot was riding on Chirag Arora’s shoulders as he is a final term army cadet, and also the quartermaster sergeant of the squadron, but the race had one more responsibility it was yet to heap on him—his an unwell teammate.

As the race progressed, Arora saw his teammate and junior, Devesh Joshi, in a precarious condition. On the verge of collapse, Arora realised that Joshi would probably not make it on his own. He decided to help him out, by carrying Joshi on his back for half a kilometre, finishing the race in 55 minutes.

Soldiers’s Spirit & Camaraderie !
NDA Cadet,who carried his injured buddy 2.5 kms on his back so that he is able to finish the run and not left behind.
GOC 2 Corps, Lt General Kler went from Ambala to NDA Pune to give a pat to Cadet
He also presented his Raybans to him😊 @adgpi pic.twitter.com/FreWNfEXeu

This display of solidarity, and putting the team before self, is a testament to the ‘squadron spirit,’ which is taught and nurtured throughout the three residential undergraduate programme. The squadron and the NDA become the cadet’s family and home away from home for the duration of his military training.

Naturally, Chirag couldn’t allow his squadron cadet to lose out on points, so he ensured they crossed the finishing line together, according to an NDA officer, who spoke to the Times of India. 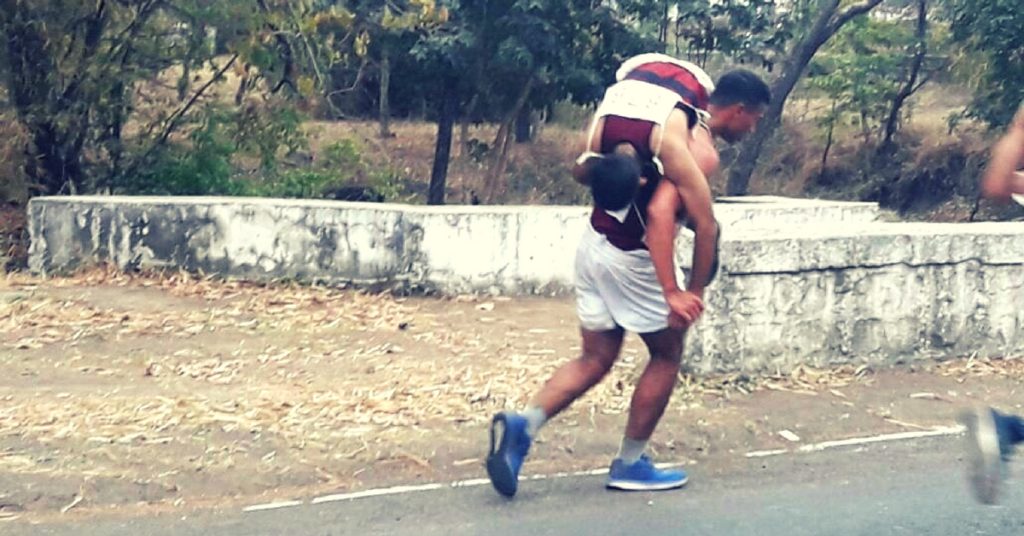 The challenging race, where the slowest runner is as vital as the fastest, is a genuine test of strength. Kudos to the presence of mind for Cadet Chirag Arora, who passed it with flying colours!