People living in Bengaluru, Chennai and New Delhi might not agree, but a survey by the Economist Intelligence Unit has found these three Indian cities to be among the cheapest in the world. Bengaluru, despite being India’s information technology hub and home to a thriving set of software engineers, ranked at 129 in the survey and has managed to earn the title of the cheapest city in the country.

According to the Economist Intelligence Unit’s Worldwide Cost of Living 2018 survey, the three Indian cities and their counterparts in South Asia offered the best value for money.

The report noted that while “India is tipped for rapid economic expansion, but in per-head terms, wage and spending growth will remain low. Income inequality means that low wages are the norm, limiting household spending and creating many tiers of pricing as well as strong competition from a range of retail sources. This, combined with a cheap and plentiful supply of goods into cities from rural producers with short supply chains as well as government subsidies on some products, has kept prices down, especially by Western standardss,” the report noted.

Damascus, the capital of strife-torn Syria, is the cheapest city in the world ranked at 133 on the index, four places below Bengaluru. Chennai was two placed above Bengaluru at 126 while New Delhi was a further two places above at 124. 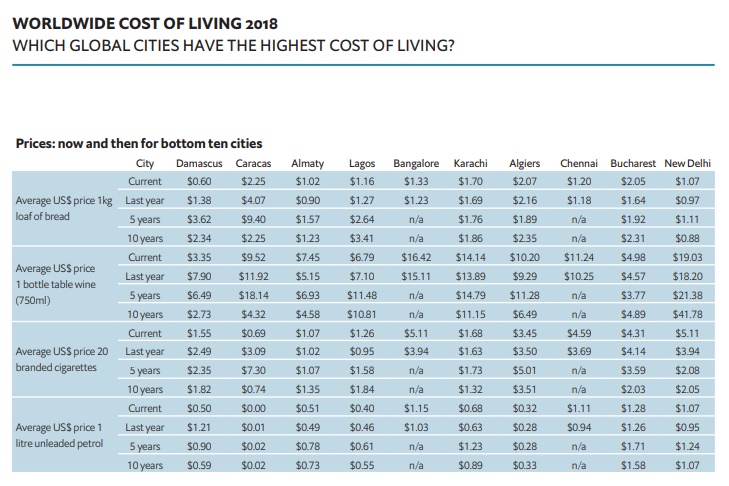 How the survey was conducted?