Divyanka Tripathi wrote, “God has structured us in a manner for a reason. Nothing can be shameful about it”

Divyanka Tripathi appeared visibly excited about her new look for Yeh Hai Mohabbatein – she debuted her new look this week but what she did not expect is that netizens will have something harsh to say about it. While most of her fans loved her look, Divyanka Tripathi was also trolled for sporting a darker skin colour than usual to play a Haryanvi character on the show. The idea to wear dark makeup was considered as “disgusting” by one user and this is what was written in the comments section: “That’s pathetic of you to do a black face for a TV serial. Being dark is not a bad thing and this is really disgusting of you to do.”

But Divyanka will have none of it and responded sternly to the user, asking: “If I chose to be dark… How’s it pathetic? Do you find it pathetic? You guys don’t even think before bashing! Which Indian actor will voluntarily choose to look dark on screen? It’s not usual!” In another comment, Divyanka added: “Know me first before judging! I’m doing that make up myself! Every day! So please… Watch the track, understand and respect instead of writing baseless provocative comments!” 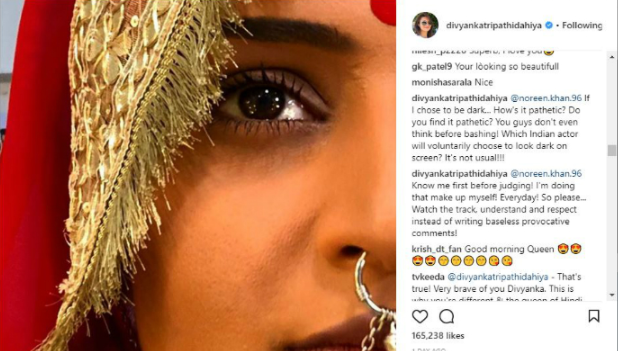 See Divyanka’s post here: “Do not miss her tonight! Discover a riot behind this veil…” is what she had captioned.

Do not miss her tonight! Discover a riot behind this veil… Tonight at 7:30pm on #YehHaiMohabbatein @StarPlus. #ShannoTeraSwagger

A post shared by Divyanka Tripathi Dahiya (@divyankatripathidahiya) on Jan 16, 2018 at 4:20am PST

Divyanka also shared another glimpse of her look ahead of the recently aired episode of Yeh Hai Mohabbatein:

A post shared by Divyanka Tripathi Dahiya (@divyankatripathidahiya) on Jan 16, 2018 at 6:00am PST

Divyanka Tripathi is best known for playing the protagonist in Yeh Hai Mohabbatein, which also often features her husband Vivek Dahiya as a cop. The couple celebrated their first wedding anniversary in July last year and were also the winners of Nach Baliye 8. Divyanka Tripathi is one of the most loved TV celebs in India and is the highest followed Indian TV celebrity on Instagram.