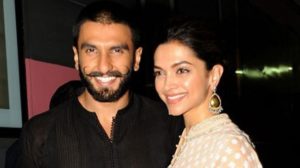 Celebrity couple Deepika And Ranveer are now officially husband and wife after exchanging vows yesterday, following a Kannadiga Brahmin ritual at the beautiful Villa Del Balbianello at Lake Como in Italy. The villa is said to be a 17th century architectural mansion with French and British furnishings.

In symbolism to Ranveer’s heritage, the couple will have a Sindhi wedding at the same venue today. It was said that Ranveer made a grand entrance  to the ‘tune Maari entriyaan’ song ,playing at the background during the Sangeet. Shubha Mugdal’s Thumri performance made Deepika emotional and Ranveer got up to hug his ladylove.They were officially engaged before the day of their Konkani (Kannadiga) wedding by exchanging rings.Their pre-wedding ceremony included a Mehendi and Sangeet.

It was said to be a family affair with only family and close friends of the bride and groom in attendance. A handful of celebrities from Bollywood that include the likes of Shah Rukh Khan, Farah Khan and Sanjay Leela Bhansali, which were special to both or either the bride or the groom, were invited to the wedding.

A wedding reception is to be held in Bangalore on November 21 and another one in Mumbai on November 28. Sabyasachi Mukherjee is said to be the designer of both the bride and the groom.

Deepika And Ranveer met on the set of Ram-Leela and felt in love. Their love blossomed and they subsequently did two more blockbusters together. Bajirao Mastani and Padmavat consolidated their chemistry both on-screen as well as off-screen.