Former Australian cricket captain Steve Smith has had a low-key but impressive return from cricket exile making a half century in a Twenty20 cricket match in Canada.

The 29-year-old cricketer, who apologised for the ball-tampering incident at a March news conference during which he broke down in tears, said the scandal was not on his mind during his first game back.

“Honestly when I am out in the middle everything else is a blur. Just concentrate on what I am doing and it’s almost like my haven I guess,” Smith said.

“I’m not going to lie, it has been a difficult time in my life, there’s no doubt about that.

“But I’ve accepted my punishment, I’ve accepted what I’ve gone through and I’m moving forward and part of my rehab is playing cricket as well and that’s what I love doing.”

The opening match of Global T20 Canada between the notional teams of Vancouver and Smith’s Toronto was an entertaining, high scoring affair. Chasing Vancouver Knights’ 227-4, Smith came to the crease four balls into the innings with the Toronto Nationals on 7-1. 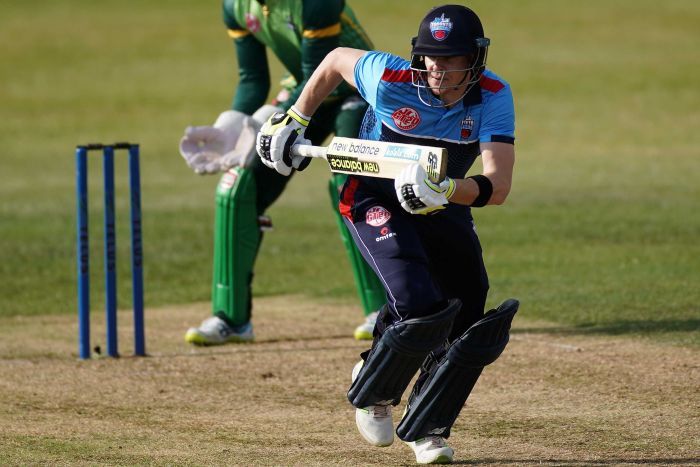 On a smallish ground and slow wicket, Smith was set straight away. He played elegant glides, whipped the ball off his hips and drove powerfully. Smith reeled off 61 runs from 41 balls, with eight fours and a six off fellow-Australian Fawad Ahmed – the only bowler to trouble him, and who eventually had Smith stumped.

Smith walked off to a standing ovation from the crowd. There might be places in the world where Smith would get a roasting, but Canada is clearly not one of those. The crowd’s positive disposition towards him was palpable from the moment he stepped on the ground.

At the post-match press conference, Smith looked relieved to face the media with a score under his belt. When asked if he was nervous playing his first match after everything he’s been through, he smiled and said, “I don’t get nervous. I just love being out in the middle.” Today, perhaps more than ever, it showed.