Video has led to speculation that Steve Smith rubbed lip balm on the ball.

Smith laughed off the reaction, after watching a replay of the video, saying it was his standard technique for helping shine the white ball with no assistance from any foreign substance.

Australian captain, Steve Smith has shot down suggestions of ball-tampering after video of him using lip balm from the corner of his mouth during Sunday’s one-day loss to England raised eyebrows. Smith laughed off the reaction, after watching a replay of the video, saying it was his standard technique for helping shine the white ball with no assistance from any foreign substance. 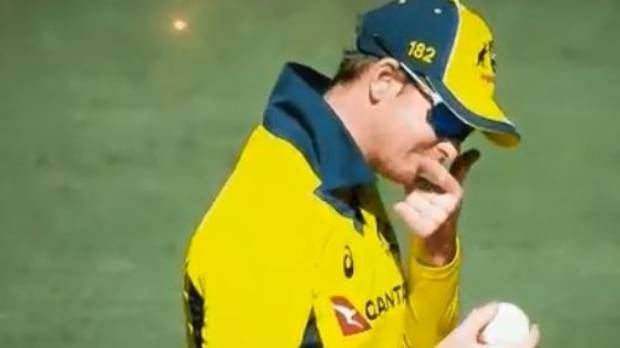 The suggestion was that Smith was applying an illegal substance to the ball, something he denied after being shown a video of the incident during the post-match press conference.

“It was all spit. People said something about lip balm. If you look at my lips they are pretty dry. I certainly didn’t have any of that on,” he told reporters after the match.

“It is just the way I get the spit into the side of my mouth and get some spit onto the ball. There was nothing in it.”

Steve Smith responds to questions raised over whether he used lip balm to polish the ball in Sunday's #AUSvENG ODI pic.twitter.com/QHxbN6fqJA

England last month blasted ball-tampering allegations against them as a “beat-up” after footage of England bowler James Anderson working the ball with his thumbnail drew suspicions during their Ashes test match in Melbourne.

“It’s a beat-up. As soon as I saw the headlines I raced into the umpires and that was their words: ‘Nothing to worry about, it was a beat-up, absolutely fine’,” Bayliss said at the time.

England sealed the five-match ODI series in Sydney after a stunning century from Jos Buttler helped the visitors to an unbeatable 3-0 lead — a remarkable turnaround after Australia had trounced them 4-0 in the Ashes Tests.

Buttler said: “I was pretty sure it was out. I think any wicketkeeper would tell you when they’ve got their fingers under it.”

Meanwhile, Eoin Morgan believes England’s performance in the third ODI has shown his side are peaking towards the 2019 World Cup. On a pitch that challenged their dynamic batsmen, a score of 302 for six was posted and defended to seal victory by 16 runs and a 3-0 series lead.

After coming unstuck on a similar surface in Cardiff during the 2017 ICC Champions Trophy semi-final, Morgan pointed to the contrast in displays then and here in Sydney.

“Cardiff was a place versus Pakistan where reverse swing played a bit part,” the captain said. “And it did today as well. They got it going quite early. We responded exceptionally well. As a group, we gave a lot more.”