Virender Sehwag smashed a quickfire half-century in the first match of the Ice Cricket Challenge at St Moritz Ice Cricket 2018 against Shahid Afridi’s Royals XI in the T20 match.

Leading the Royals side, Sehwag entertained the spectators with some breathtaking strokes and showed that years after retiring from the game, he still can smash bowlers all over the park.

Sehwag wasn’t undone by the unusual conditions or distracted by the backdrop of breathtaking Alpine range, hitting five sixes as he scored 62 off 31 balls. Following his exploits in the resort town of St Moritz in temperatures below zero degrees, Sehwag took to Twitter and posted a brilliant one-liner about his knock. The post was a massive hit and also found a fan in the form of ex-India captain Sourav Ganguly.

Sehwag’s quickfire half-century and Symonds’ 40 the Diamonds’ XI finished with 164 for nine from 20 overs. Former England batsman Owais Shah was the match-winner, however, hitting five sixes in his innings of 74 as Afridi’s team won the match with nearly five overs to spare. 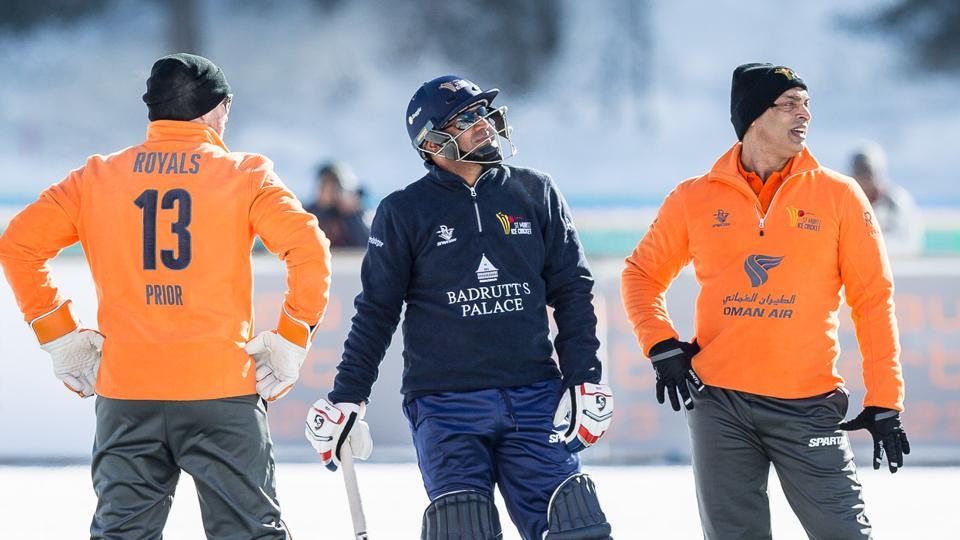 The match played on a frozen lake with temperatures hovering around minus five degrees, featured former stars like Michael Hussey, Shoaib Akhtar and Mahela Jayawardene.

An artificial turf carpet was used for the match, with players using traditional cricket gear and a pink ball, but wearing normal sports shoes rather than spikes.

“It is an exciting concept and needs to be persisted with and it can only grow in people’s minds. It can also help St Moritz become a good sports tourism destination,” Sehwag had told PTI.