Virat Kohli has a new incentive to break Sachin Tendulkar’s record for most ODI hundreds – a bottle of champagne with his idol and guru.

Tendulkar, who holds the record with 49 hundreds, has promised to share a bottle of champagne with Kohli if the Indian captain scores 50 hundreds in the format.

Kohli currently has 35 ODI hundreds and is widely touted to break most of Tendulkar’s records in the 50-over cricket.

Many have tipped Kohli to overtake Tendulkar in the next few years and Tendulkar, who was at the Mumbai launch of Boria Majumdar’s book Eleven Gods and a Billion Indians, has revealed that he will personally go to Kohli and share a bottle of champagne if the 29-year-old manages to break his record. 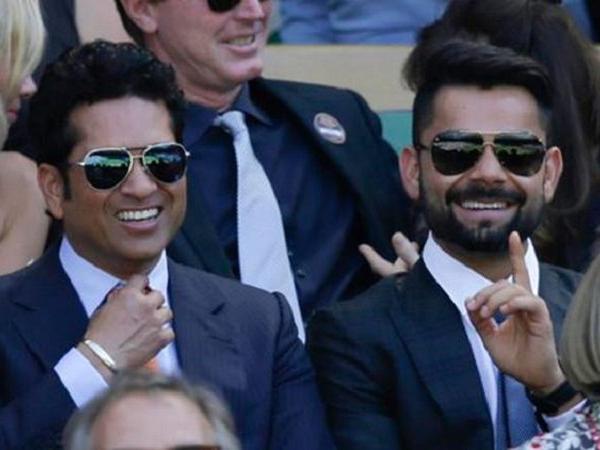 “I will go and share a bottle with him if he breaks my record. I won’t send him champagne bottles; I will go there and share it with him,” Tendulkar was quoted saying.

Virat Kohli, who was present at the Kolkata launch of the book, said that Sachin Tendulkar has had a big impact on his career. When Kohli got back from a nightmare tour of England where he scored just 134 runs in 10 innings, he went to the master for help. The change was evident as he scored 4 centuries in 4 Test matches in Australia later that year.

“I don’t have too many people who are very close to me. That is just the way life has gone on for so many years. Because naturally when someone has stuck by me in tough times, I value that person a lot. I continue to do that. The impact he has had in my life growing up… I understand the importance of it. If someone can inspire you like that and you end up becoming someone and you feel like there is no greater pleasure than that. So that (handing his father’s threads over to Tendulkar) was just a gesture of thank you to the guy who has inspired me to do what I am doing. For me, the human connect is paramount,” Kohli had said at the launch in Kolkata on April 7.

When Kohli went through a nightmarish tour of England in 2014, he turned to Tendulkar for help. A few months later, he smashed four hundreds in four Tests in Australia and has not looked back since.