Sunil Ramesh rose to the occasion as he played a great knock of 93 to help India retain Blind Cricket World Cup title after beating arch-rivals Pakistan by two wickets in a thrilling final played at the Sharjah Cricket Stadium in UAE on Saturday. 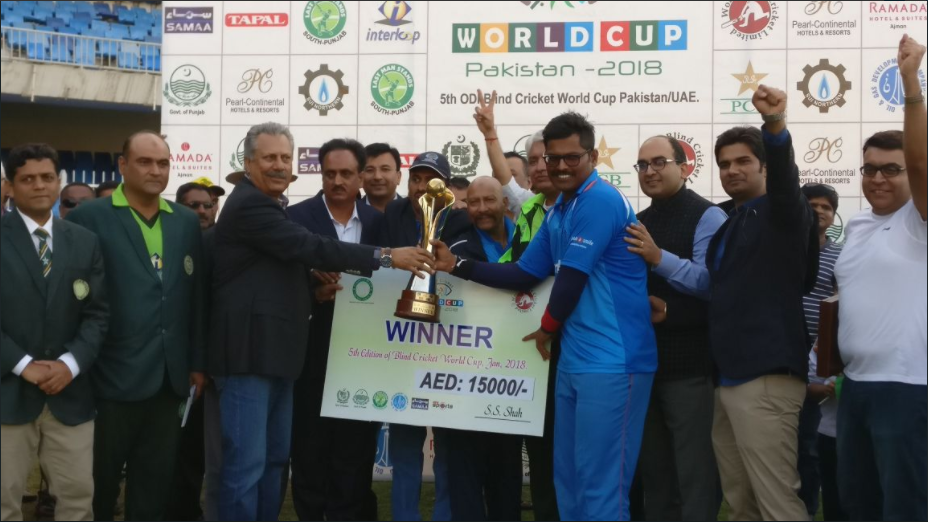 Chasing a huge 308-run target in 40 overs, India romped home in the penultimate over of the match. India started off their chase in a cracking manner racing to 111/1 after 15 overs but soon lost two quick wickets in the form of run-outs to be at 116/3 after 16th over.

Congratulations to our cricket team for winning the 2018 Blind Cricket World Cup! They make the nation proud and inspire every Indian with their game as well as phenomenal attitude. True champions!

Earlier, riding on Badar Munir’s fine half-century, Pakistan scored 307/8 to give India big target in the final of the fifth edition of the tournament.

Riyasat Khan and skipper Nisar Ali also played solid knocks of 48 and 47 respectively to take Pakistan total past 300 after they were put into bat by India. Pakistan reached 200-run mark in 27 overs after losing five wickets.
India, who are the defending champions, defeated Pakistan by seven wickets in their group match on January 13.
Pakistan made it to the final after defeating Sri Lanka by 156 runs while India beat Bangladesh by seven wickets to book their place in the final. India, who are favourites to retain the title, have remained unbeaten in this tournament.