UP CM Yogi Adityanath confirms the construction of the tallest statue of India ‘The Lord Ram Statue’. Considering the historic importance of Lord Ram birth place CM Yogi Adityanath on Saturday announced the forth coming step of building Lord Ram statue on the bank of Sarayu River. UP CM said during the press release that the statue of Lord Ram will be taller than Statue of Unity (182metres).

However, the government has not yet declared the expenditure cost for the construction of Lord Ram Statue and its possible location. 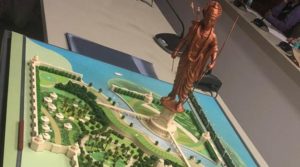