It is a normal sight to watch leaflets cautioning people against bogus faith healers who promise luck, lucre, and love for money in India. But not the normal sight when the same leaflet makes their round in the United Kingdom. Yes, you read that right. The United Kindom police are issuing the leaflets in Punjabi, Gujarati and English to make people aware of the same.

Leicester City, which has a large Indian origin population, is flooded with the faith healers, most of whom, the police said, “are tricksters and conmen who are linked to organised criminal networks”. Their “services” are usually offered through flyers, local radio and adverts.

Leaflets, particularly targeted people living in city’s Belgrave and Rushey Mead area This area is predominantly inhabited by people of Indian origin and is a centre of Indian/Asian businesses, including the “Golden Mile” comprising several jewellery shops and branches of Indian banks.

“These individuals prey on people when they are at their most vulnerable – people who are under great strain due to unfortunate life circumstances…They are believed to operate nationwide and to move location across the country,” the leaflet says. 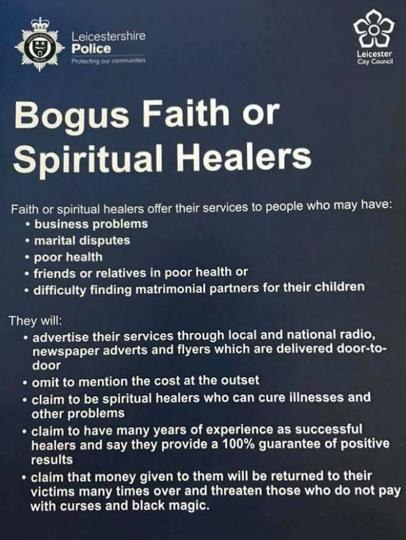 Many of the people living in Leicester have fallen victim of these bogus babas over the years. One man who went by the name Kamalji was sentenced to nine years in jail and in 2016, his prison term was extended by five years for failing to pay back £613,500 conned from his victims.

The Leicestershire Police and a rationalist organisation in Birmingham have been campaigning against such babas.
The latest police caution says: “Belgrave and Rushey Mead police are alerting residents to be aware of bogus faith or spiritual healers. Please remind family and friends, especially those who may be suffering from stress or worry, not to be drawn into handing over large amounts of money for these ‘services’.”

A police spokesman said: “They offer their services to people who may have business problems, marital disputes or are in poor health. They will advertise their services through local and national radio, newspaper adverts and flyers which are delivered door to door.

“They will claim that money given to them will be returned to their victims many times over and threaten those who do not pay with curses and black magic. If anyone is aware of anyone claiming to be a faith healer, we would like to hear from you.”

Palmists, astrologers and others offer their services in various parts of the United Kingdom, mainly in areas with large population of Indian/Asian origin, such as Hounslow and Wembley in London, Birmingham and Manchester.