There was a time when hot-air balloons displayed the latest attraction in the town, but on Thursday, protesters in the city fell back on a time-tested method to send out a message to Prime Minister Narendra Modi.

With the PM deciding to take an Army helicopter to reach the DefExpo at Thiruvidanthai on the East Coast Road, protesters released black balloons into the air asking him to ‘go back’. But in the cat and mouse game played out between protesters, who wanted to oppose Modi’s visit, and the police who used all tricks to thwart them, the PM’s pilot had the last laugh. 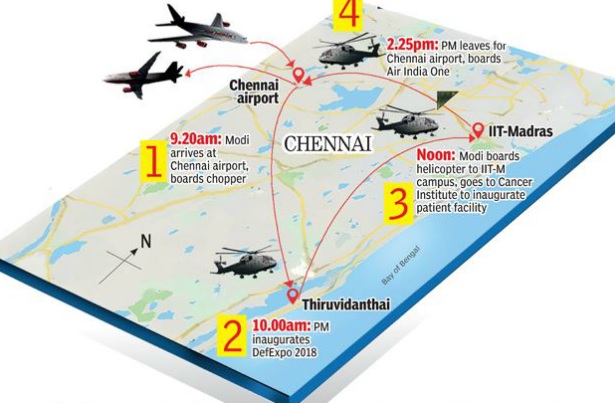 As black balloons soared from Alandur and Manapakkam near the flight paths of planes, the pilot ferrying Modi in the military chopper decided to change the runway. Sources said that the helicopter with the PM onboard was scheduled to take off towards Alandur and fly over the city to reach Thiruvidanthai. Instead, he announced that the helicopter would use the opposite end of the runway. The chopper took off towards Pallavaram, flew over Tambaram and took an arc over the far southern suburbs to reach the expo site on the ECR. The helicopter did not fly over the heart of the city where the protesters were going berserk.

Usually, flight plan, including take-off direction, are decided in advance and not changed. But pilots of VIP helicopters have the authority to change plans at the last minute.

“In this case, the pilot informed at the last minute that the helicopter will take off in another direction. It took off towards Tambaram,” an official said. 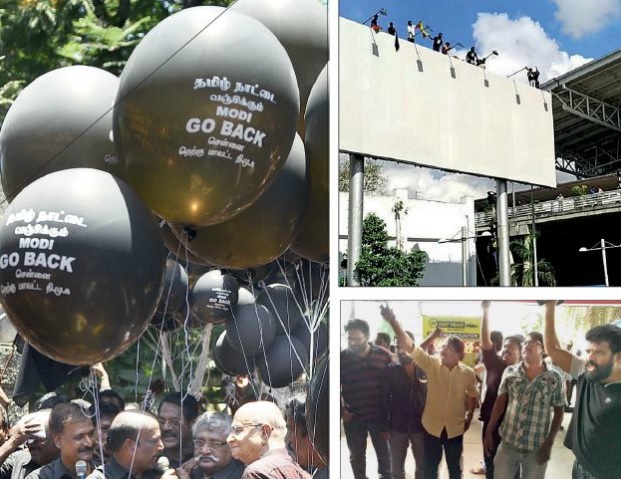 If the balloons were not enough, some villagers near Salem sent pigeons to carry letters to Modi. M Suresh said, one of the villagers of Soorapalli, said, “We have decided to register our protest out in a different way. But we do not know whether that letter would reach him or not.”

On the roads of Chennai, DMK workers led by MP K Kanimozhi and legislator J Anbalagan marched on Raj Bhavan from Panagal Maaligai in Saidapet and were arrested. At another protest venue near Pallavaram, police nabbed director-cum-politician Seeman in connection with an attempt to murder case slapped on him at the Triplicane police station for attacking a policeman during the anti-IPL protests.