“Our teams are working to resolve an issue affecting a small number of Indian users. We will notify affected account holders directly. Reminder: do not click on links in DMs coming from unknown accounts,” said Twitter in a warning after the hacking of accounts.

The blue tick from the verified handle of Anupam Kher and Ram Madhav also disappeared before it was eventually temporarily shut down by Twitter.

Kher, who is currently in Los Angeles, said he got to know about the breach from his friends in India and has alerted the microblogging site about the incident.

“My Twitter account has been hacked. Just got few calls from friends in India about it. I am in LA and it is 1 am,” Kher told PTI over a text message.

“The Big Sick” actor said he received a link from Rajya Sabha MP Swapan Dasgupta in a direct message, a first-ever from him yesterday, which he clicked upon. “Got a DM yesterday from Mr Swapan Dasgupta’s account about a link. A first from him. So opened it. Have spoken to Twitter already,” Kher added.

“Hello there! I want to introduce ourselves first. In 2002, the Republic of Turkey to protect it from cyber attacks and to combat terrorist organisations were founded. Turkey’s first cyber army of. We have 300,000s (sic)”, read a pinned tweet on Swapan Dasgupta’s handle 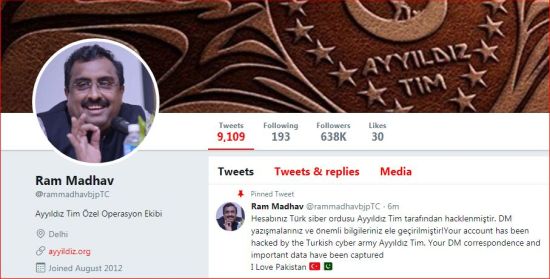 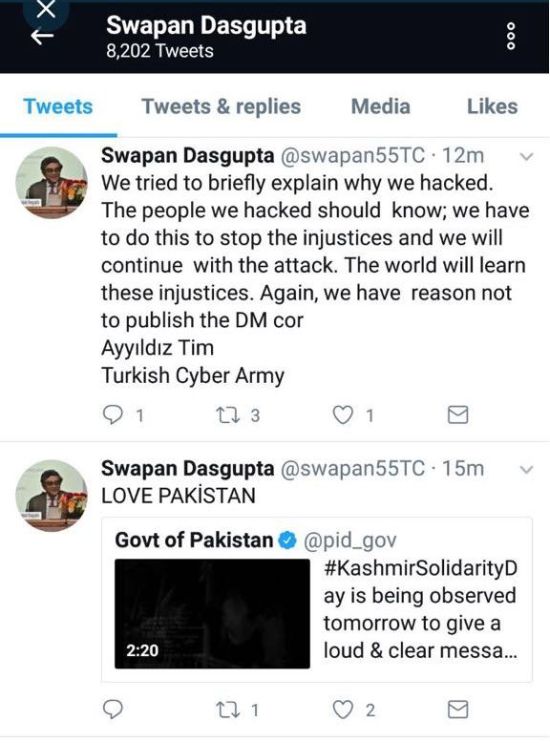 DMs (Direct messages) were also sent to imminent journalists from the hacked accounts, which were being shared on Twitter.

Early this year, Twitter account of India’s Permanent Representative to the United Nations Syed Akbaruddin was also hacked by the same cyber army, when two photographs of Pakistan’s flag and the neighbour country’s President Mamnoon Hussain were posted from his account.

Evidently, the cyber attack has not been a new strategy for the terrorists in Pakistan, and government officials have been prime targets.

In 2016, a total of 199 government websites were hacked in India, the Ministry of Home Affairs (MHA) had told the Parliament.

The website was, however, blocked immediately by the Computer Emergency Response Team (CERT.IN).

As technology has progressed, so has the strategy of terror attacks, and cyber warfare has taken over the battlefield to breach the national security.