Dr Kavi Kumar Azad, who essays the role of Dr Hansraj Hathi on the popular show Taarak Mehta Ka Ooltah Chashmah, passed away this Monday, July 9, breaking the hearts of many fans. The actor’s character was very famous and was adored for his comic timing. The producer of the show announced the news in a sad statement and now actor Varun Dhawan also mourned his loss.

Varun took to his Instagram and shared a photo of the late star. Varun who had previously shot with the actor shared that it was a pleasure to shoot with him and he was always very sweet and loving. 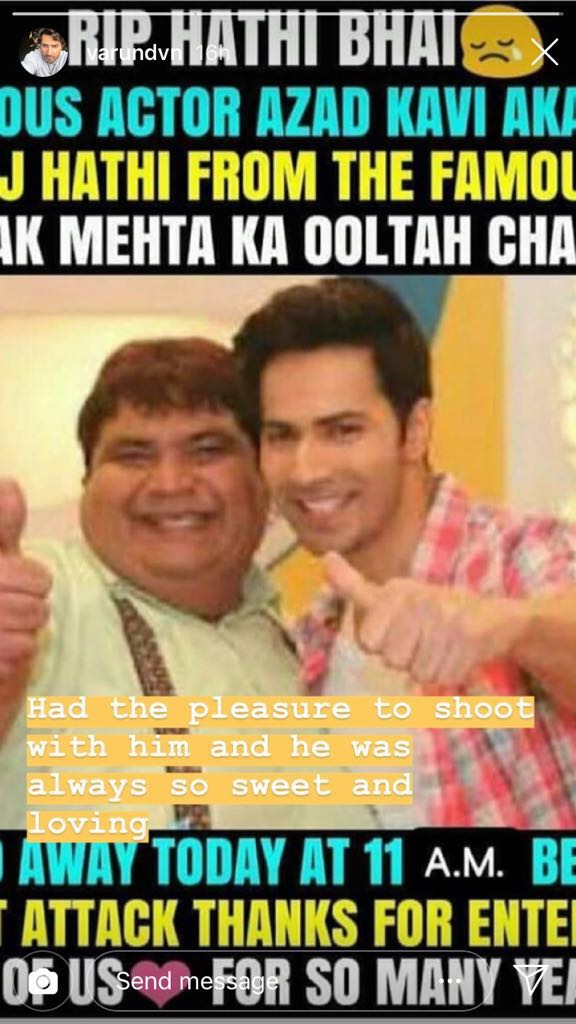 Kavi Kumar was not just a popular face on TV but has acted in films as well. He has worked in films like Funtoosh and Aamir Khan’s Mela. His popular comedy show Taarak Mehta Ka Ooltah Chashmah was not just high on TRP’s but also holds the Guinness world record for airing the maximum number of episodes ever aired by a television show.

Varun is currently busy with the shoot of his upcoming film Kalank opposite Sanjay Dutt, Alia Bhatt, Varun Dhawan, Sonakshi Sinha and Madhuri Dixit. Kalank is a period drama which is helmed by Abhishek Varman and is slated to release in April 2019.