Oh God, Vidya Balan’s latest outing has stirred a controversy. The actress was recently spotted with husband Siddharth Roy Kapoor and her loose kurta and what looked liked a baby bump, made fans curious to know if the gorgeous lady is pregnant?

So, the release of Irrfan Khan’s film Karwaan is just around the corner and we really can’t wait to watch the film. And while we are waiting to book our tickets ASAP, the producer of the movie, Ronnie Screwvala, hosted a pre-release bash for his friends from the industry. The party was a star-studded one which saw the likes of Karan Johar, Saif Ali Khan, Bhumi Pednekar and more. But the one who has got everybody talking is none other than the Dirty Picture actress Vidya Balan. 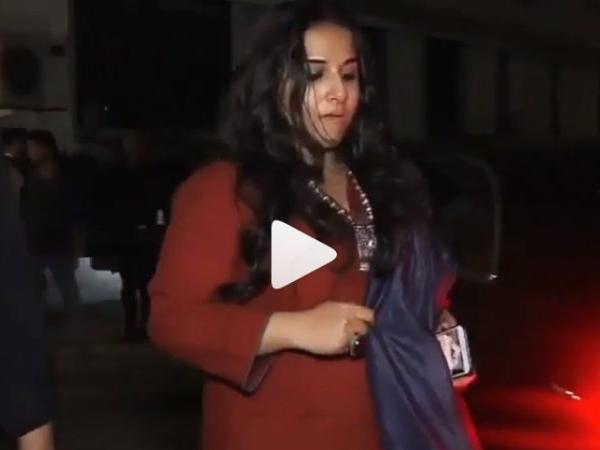 The actress gets clicked when she was leaving the party and a video has also surfaced on the internet as well which suggests that Vidya is pregnant or at least that is what the fans are assuming. Have a look at the video that we are talking about.

In the video, Vidya and husband Siddharth Roy Kapoor are seen having a fun conversation with Bhumi Pednekar and while they were seen having a chat, all eyes were on Vidya who was looking a little uncomfortable.

Towards the end of the video also, Vidya is seen covering her belly with her dupatta. Here is what the fans have to say about it.