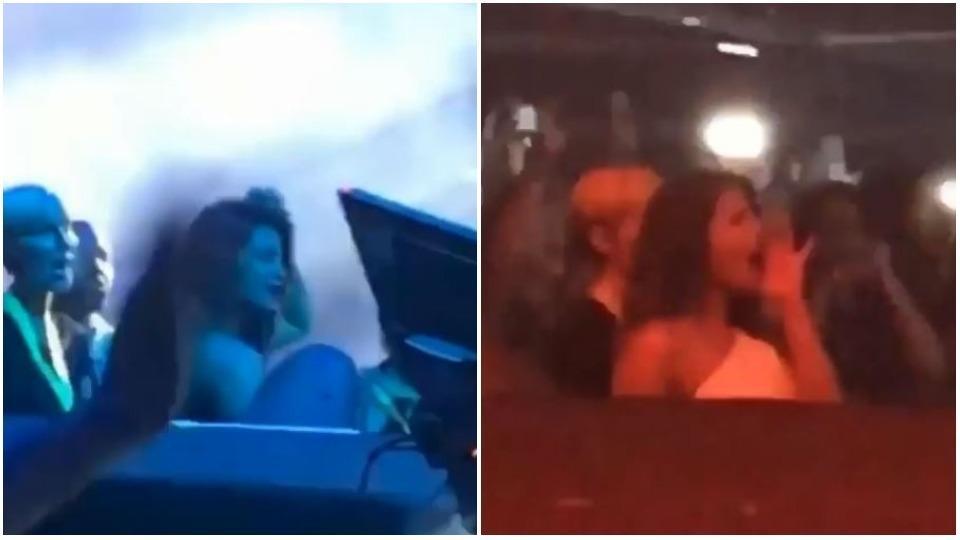 Priyanka Chopra is fiance Nick Jonas’ forever cheerleader. The Quantico actor was the singer’s biggest supporter as he performed for an excited crowd in Singapore on Sunday — Priyanka could be seen dancing along, bobbing her head and cheering for Nick.

Fan videos from the mosh pit show Priyanka swinging to Nick’s music, waving her hair and looking so gorgeous in the pale blue lights. “It’s Priyanka Chopra!” “Priyanka Chopra is here! Holy sh*t so cute,” wrote her fans on their pictures. She is seen wearing a white, single shoulder dress. Priyanka and Nick reportedly got engaged in London last month. Nick performed alongside Alessia Cara, CL and the Sam Willows, Afgan and Slot Machine at the event and Priyanka stayed close to him throughout the concert.

On Sunday, a video of the two from a party went viral. In it, they could be seen indulging in some adorable PDA and whispering sweet nothings in each other’s’ ears.

Priyanka and Nick reportedly got engaged on her 36th birthday in London in July. He is said to have shut down an entire store of Tiffany’s to buy her the perfect ring.

One of the most humble person i have ever met. Thank you for being so kind @priyankachopra. It was lovely to meet you. 😊 . . And this picture was taken by @nickjonas. Love them! Thank you @mtvasia.

The couple first met at the 2017 Met Gala where they both wore Ralph Lauren. In May 2018, they sparked rumours of a relationship with their frequent appearances on lunch and dinner dates. She was his date at his cousin’s wedding in New Jersey and he accompanied her to India to meet her friends and mom and enjoy a small holiday in Goa with her cousins.

They will reportedly wed in October.