Despite lots of disputation, Veere Di Wedding has earned a very good collection in its box office comparatively any other movies in this time. It is often said that hard works must meet its success whether it is silence or in publicly. This time there lies no exception. The hard works of Kareena Kapoor and Sonam Kapoor have turned out the movie “Veere Di Wedding” to be a successful film, and now they are getting ready for the party even harder. Kareena took off to London earlier this week and is now spending quality time with one of her Veeres, Sonam.

Arjun Kapoor was also a part of the meet-up. He posted a grand selfie with Kareena and his cousins Sonam and Rhea Kapoor. In great company !!! #londonsummer with the Veere s & @samyuktanair of course… #bebokillingit and the #kapoorsisters killing it… @rheakapoor @sonamkapoor. Also part of the celebrations was Sonam’s friend, Samyukta Nair. He has shared also shared Boomerang videos of Kareena, Sonam and Rhea walking hand-in-hand with each other. They had pizzas together at Samyukta’s Jamavar restaurant.

See all beautiful moments of Bollywood divas below. 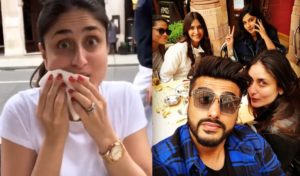 The friends took some time out and were spotted indulging in pizza. We all are aware of Kareena Kapoor and her obsession with fitness. But the actress was seen binging on pizza. And while Rhea Kapoor captured her eating it, she was quick to cover her face, trying to insist that she was eating the spinach salad. Sonam also shared his posts on her own Instagram stories. An Instagram story sees the actress screaming, “Oh god, I am caught.” while Sonam Kapoor said ‘Hi’.“I get to celebrate the success of Veere in London with the Veeres,” Arjun captioned another selfie.

Veere Di Wedding has made Rs 50 crore in six days. It had made Rs. 36.52 crore in its opening weekend itself, making it to the top five-weekend grossers of 2018.