Comedy star Kapil Sharma seems to have dug himself into a new, very deep hole this time. In a new tweet on late Friday night, he accepted that it was indeed him who wrote the string of highly abusive tweets earlier in the day.

However, he tweeted the same message again on early Saturday morning with a photo of a police complaint filed against a journalist and the former producers of his show.

Kapil sent out multiple tweets on Friday, each more abusive than the other. His initial few tweets were in defence of Salman Khan and his prison sentence in the blackbuck poaching case. “I have met many people who have told me with pride that they hunt lions. Salman helps people… he is a good man. I don’t know if he did it or not but the system is crooked. let me do good work,” he wrote. The monologue then snowballed into expletives-filled rant against the media. He said that if was ever to become prime minister he would hang everyone who spreads ‘fake news’.

His own fans and followers asked him to not tweet abuses but the actor snapped back at them as well. 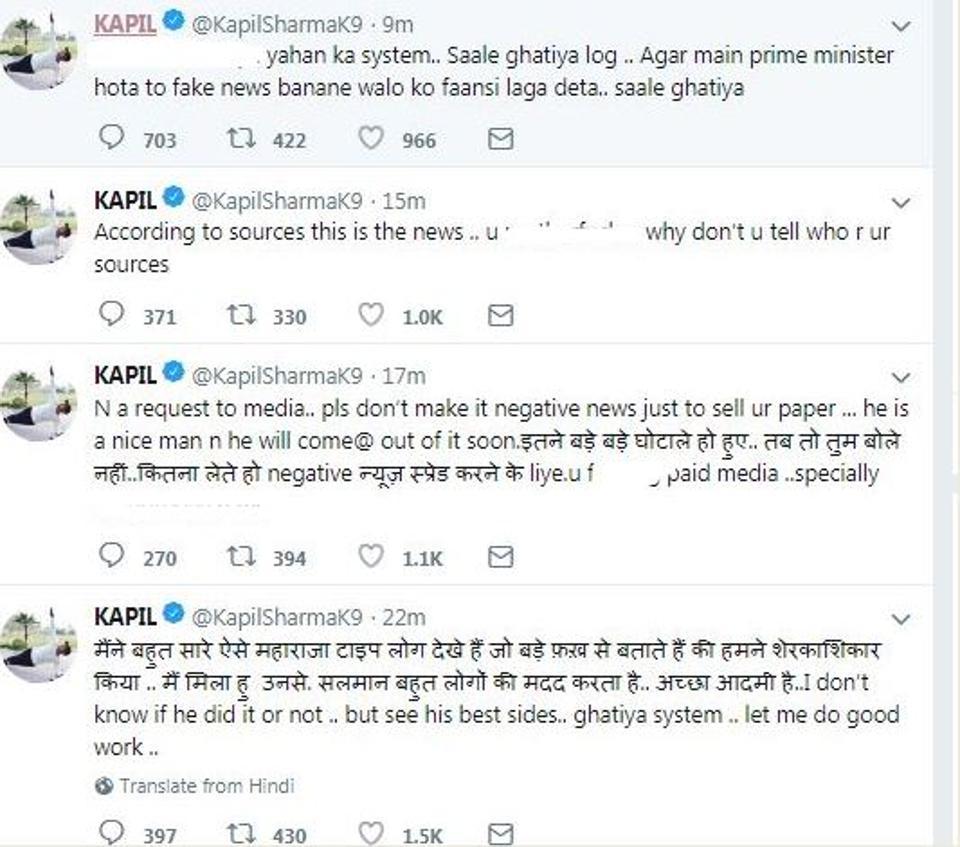 He later tweeted that a hacker was responsible for all the messages but not many could bite into that explanation. Keen eyes on Twitter pointed out how he never puts periods at the end of his sentences and heavily uses double periods to give pauses in his messages, something he did in the abusive tweets as well. 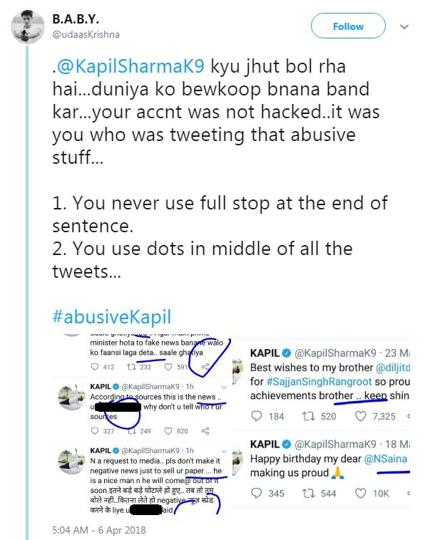 According to a report in entertainment news portal Spotboye.com, Kapil also called up their editor, Vicky Lalvani, on Friday evening. Kapil and another man abused and threatened Lalvani over the phone and accused him of making his mental condition worse. Lalvani recorded the entire conversation and posted it on YouTube.

Apparently he was upset about some stories against him. I was only doing my work. He called me, used abusive language & also said offensive things about my daughter. He handled his success very well but couldn’t handle his drop: V Lalwani, journalist on his spat with Kapil Sharma pic.twitter.com/y8XXmtfpN3

Kapil’s troubles began in March 2017 when he physically abused his co-stars from The Kapil Sharma Show, specially Sunil Grover, on a flight. Sunil later quit the show and more actors followed him on his way out. The TRPs for his show began to fall as the public opinion sided with Sunil. The channel had to ultimately take the show off air after Kapil cancelled several shoots with Bollywood actors such as Ajay Devgn, Amitabh Bachchan and Shah Rukh Khan.

He recently launched a new show, Family Time With Kapil Sharma, which was met with negative critical and audience reactions.