Kangana Ranaut is the perfect example of a self-sufficient woman. She is successful, she is eccentric, always keeps you on the edge of your seat with her strong characters and you will always find yourself invested in the details of her otherwise all-over-the-news private life. The actress has had her fair share of relationships in the past, and some stirred controversies too. But looks like she is gearing up to settle down ‘soon’. 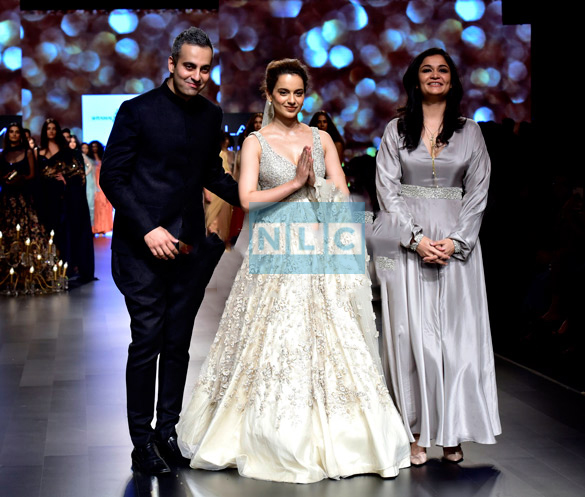 Kangana turned showstopper for designer duo Shyamal and Bhumika for their collection ‘Wonderland’ at the fashion extravaganza on Sunday. The National Award-winning starlet stunned the crowd in her pearly white sophisticated bridal couture. When asked about her marriage plans, Kangana revealed she will tie the knot “soon”. “Please give me a deadline till next February,” she quipped. Behind every successful man, is a strong-minded woman. But who is the lucky person in Kangana’s life, yet remains to be seen. For now, the actress is busy filming for Rani Laxmibai biopic – Manikarnika: The Queen of Jhansi.

About the progress of her upcoming film, Manikarnika: The Queen of Jhansi, Kangana said that film is expected to arrive in theatres by year end. “The film was earlier scheduled to be released on April 27 but as it is heavy with VFX, it is expected to be out at the end of the year. Zee is planning to announce it in a big way. So let’s wait till then,” she said.

The actress, who walked for designer duo Shyamal and Bhumika at the Lakme Fashion Week Sumner-Resort 2018, asserted that she is very career-oriented. “My career means a lot to me. I’m not going to compromise on my opportunities… I’m a go-getter and I’m going to get what I want, regardless of what people feel or don’t feel,” she added.