The first photo of Priyanka Chopra and Nick Jonas at what is supposedly their roka ceremony in Mumbai has been released by fan clubs. Priyanka and Nick are dressed in traditional Indian outfits-she in a yellow and white outfit,
he in a white kurta pajama.

The roka was reportedly attended by Priyanka cousin Parineeti Chopra, who flew back to Mumbai from a shooting schedule, and other family and friends. Nick parents, Denise and Kevin Jonas, are in
Mumbai for the festivities.

The roka will likely be followed by a party this evening, the guest list is expected to include Ranveer Singh, Karan Johar and other celebrities.

See picture of Priyanka Chopra and Nick Jonas at the roka here – the venue is the Chopra residence.

Here’s another picture from the ceremony:

All morning, the Chopra home in Mumbai has been the scene of frenzied activity with a priest pictured arriving as well as caterers. Parineeti Chopra, who accompanied Priyanka and Nick to Goa some months ago, was photographed at Mumbai airport earlier.

Last night, Priyanka Chopra and Nick Jonas were pictured at dinner in a Mumbai hotel. Her mother and brother, Madhu and Siddharth Chopra, were with them. 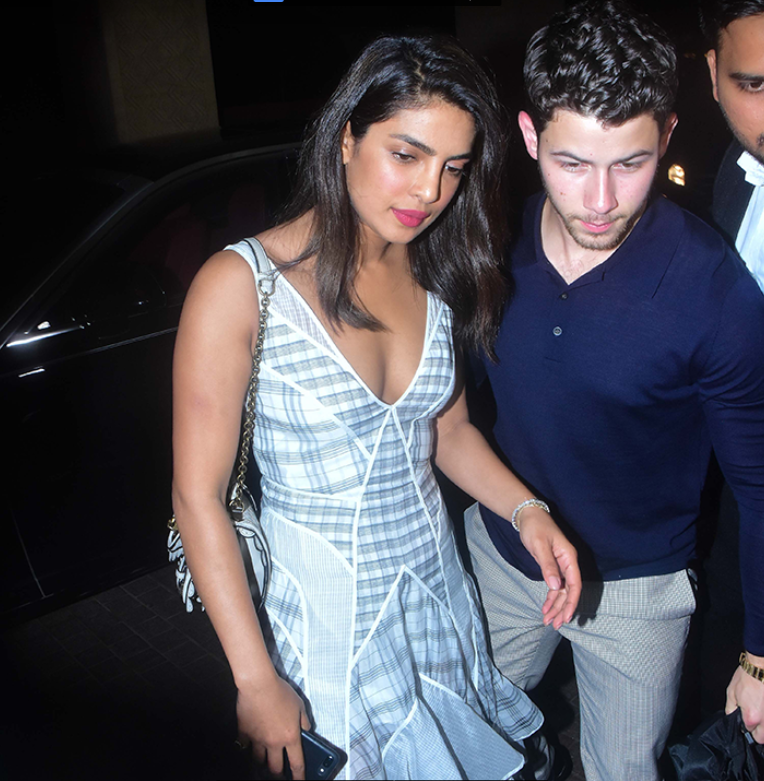 Priyanka Chopra, 36, and Nick Jonas, 25, reportedly got engaged in London on her birthday last month. Nick is said to have proposed with a diamond ring from Tiffany.