“Motherhood is a special feeling and I would love to experience it. But not right now. I don’t want to rush into things, and would only go for it when I am ready,” says Divyanka, adding that hubby Vivek is quite supportive of her decision.

This was almost one year ago’s incident when a rumour about her pregnancy broke out. But, this time not directly but indirectly through her story on Instagram saying #babyontheway which could be the best news for Divyank’s fans. 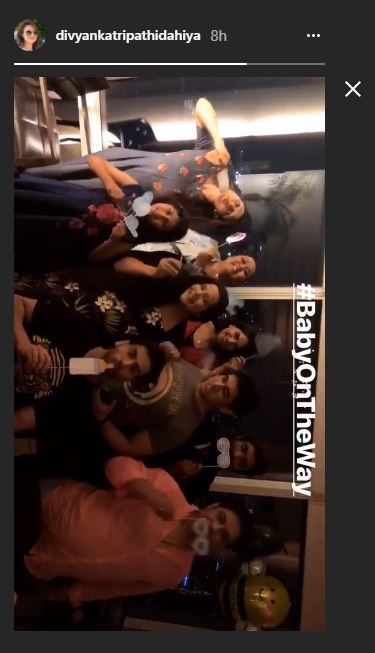 Yes, we definitely wondered if the Yeh Hai Mohabbatein actress and her hubby Vivek Dahiya had some good news for us or anything else it is! In the Insta story Vivek and Divyanka are seen with a few friends and all baby stuff around, while Divyanka has an ice candy in her hand, Vivek is seen with a milk bottle.

To the soon to be parents- Kiran and Neha.. All the very best for a hassle free pregnancy. Not long left now before your package arrives so hold on tight. Lots of love, now and always #BabyShowerBlessings by Vivek chachu 😊 P.s added a soothing background for baby viewing! He/she can watch it on loop and increase my views and see how excited we are to have him/her in this world! 🌍

TV actress Divyanka Tripathi is surprising to her fans these days and looks like the actress has some big news to share with all of us this time. We are awaiting the couple has made the big announcement we expect from the sweet couple and simultaneously wondered that for what they denied the news again and again, but all our excitements soon doomed just after Vivek shared a video that made the incidents cleared entirely. Divyanka is not pregnant. In fact, the couple attended a baby shower party of their friend Kiran and Neha who are expecting a child soon.