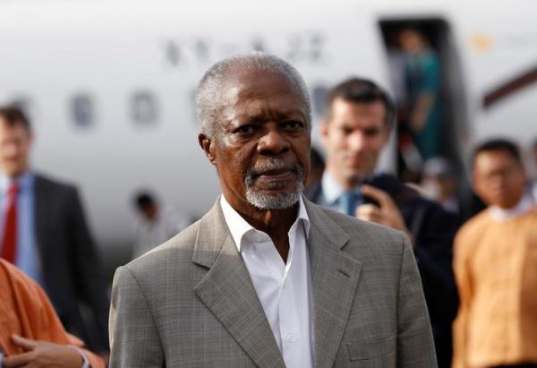 Former United Nations General Secretary and Nobel Peace Prize laureate General Kofi Annan passed away at the age of 80, following a short illness. Annan, a Ghanaian national, died in hospital in Bern, Switzerland, in the early hours of Saturday. He is survived by his wife and three children.

Announcing the news of the leader’s demise, the Kofi Annan Foundation wrote on its Twitter page, “It is with immense sadness that the Annan family and the Kofi Annan  Foundation announce that Kofi Annan, former Secretary General of the  United Nations and Nobel Peace Laureate, passed away peacefully on  Saturday 18th August after a short illness.”

Annan was the first black African to assume the office of world’s top diplomat, serving two terms as secretary-general from January 1, 1997 to December 31, 2006. He later also served as the UN special envoy for conflict-ridden Syria.

In 2001, Annan and the UN were jointly awarded the Nobel Peace Prize.

Reacting to the death, Congress MP Shashi Tharoor tweeted:  “Deeply shocked to learn of the passing of my friend & mentor #KofiAnnan. The last time we spoke he had accepted my invitation to come to Kerala in 2022 to celebrate his “thousand moons”. He was so fit I had no doubt he would go on well past that date. I have lost an elder brother.”

Remembering the late leader, UN Secretary-General Antonio Guterres, said in a statement, “In many ways, Kofi Annan was the United Nations. He rose through the ranks to lead the organization into the new millennium with matchless dignity and determination.”

Know how to stay protected from the ‘Novel Coronavirus’ that has contaminated Chinese health.